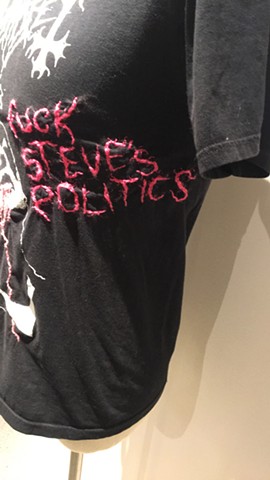 Morrissey, the notoriously eccentric lead singer for 1980s Britpop legends The Smiths, best known for his outspoken views on animal rights, has often flirted in his lyrics and performances with various nationalist themes, particularly in recent years. In May 2019 the singer performed on the late-night American network TV show The Tonight Show Starring Jimmy Fallon wearing a pin representing the far-right anti-Islamic political party For Britain. Since that time he has endeavored rather desperately to defend both his support for the party and his anti-racist credentials, while continually denouncing and attacking media outlets like The Guardian that have called attention to his disturbing views. The title of my piece refers to Morrissey’s nickname, “Moz,” as well as to the Smiths song “That Joke Isn’t Funny Anymore,” which appeared on the 1985 album Meat is Murder.

In 2014 Drew Daniel, a member of the experimental indie group Matmos, released an album of dance songs under the moniker The Soft Pink Truth. The songs on the explicitly queer-positive album were covers of songs made famous by bands in the black metal genre, a noisy and nihilistic metal genre born in the Scandinavian metal underground of the early 1990s. Along with the arsonist burning of many historic Scandinavian churches, one of the most scandalous incidents of the early black metal days was when the drummer of the band Emperor, Bård "Faust" Eithun, stabbed a gay man to death in a park in Lillehammer, Norway in August 1992. Another one of the most infamous figures in this scene was Varg Vikernes, who recorded dense and haunting metal under the moniker Burzum. While Vikernes’ music has had a lasting influence in metal and other “dark” genres, he’s even better known for his acts of violence, including murdering a musical collaborator in 1993, and for his explicit and ongoing commitment to fascist politics. During the time he was performing as The Soft Pink Truth, Daniel wore an unlicensed Burzum shirt with the hand-stitched addition: “Fuck Varg’s Politics.”

In honor of this gesture, I am sewing the words “Fuck Steve’s Politics” on to an unlicensed Morrissey shirt, in which Morrissey’s name is written in the style of the logo of black metal pioneers Mayhem; the guitarist of Mayhem, Euronymous, was Vikernes’ murder victim. Steven, or “Steve,” is Morrissey’s first name. Additionally, pointed at Morrissey's head is a logo of a cannon, representing the Arsenal football club, after whom he named the album "Your Arsenal." Among other things, I would like my piece to underscore how Morrissey, well-known for his practice of celibacy and ambiguous sexuality, offers an exemple of what Jasbir Puar has termed “homonationalism.”